Mr.Modi Government -The Process and The Result is good to all community people in India. 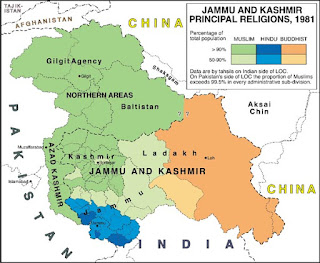 While a clear majority of the Muslims in Jammu, in Kashmir proper, and in Azad Kashmir are followers of the Sunni form of the faith, large areas in Indian-held Ladakh, most notably in Kargil district, and in the Pakistani-held Northern Areas have majorities who follow various sects that may be grouped under the label Shiah. These include the Ismailis, whose spiritual leader is the Aga Khan, whose Aga Khan Rural Support Programme is a major source of development assistance to the region, on both sides of the LOC. Reliable statistics on sectarian distributions within Islam have never been collected. However, based on such pre-independence data as do exist, Shiahs (of various sub-sects) outnumber Sunnis in Indian-held Kargil, while, on the Pakistani side of the LOC, they lead in all parts of the Northern Areas except Gilgit tahsil of Gilgit district and the western tahsils of Diamir district. In those areas, owing in part to immigration from Punjab and the North-West Frontier Province since the completion of the Karakoram Highway, the two sects are believed to be in rough balance.
n= negligible (i.e., less than 50 individuals or less than 0.1%).
Minority faiths in the Indian-held areas of Jammu and Kashmir also include the Sikhs (who number 133,675, or 2.23%), settled mainly in Jammu; Christians (8,481); and Jains (1,576). Minority religions in areas held by Pakistan are of no significance.

Off course Islam/Muslim  is the Second Largest Religious community  maintains the Second Position in total Population of the world . Also to Note Most of the Islamic countries were found to be very rich in wealth and Prosperity ,But still waiting to find and open ways and means to support and help People belongs to Islam /Muslim living across the world  to Prosper. If this happens Than Islam community will not agree to live on Minority Status is my Humble OPINION.

I STRONGLY BELIEVE THAT SUPREME COURT OF INDIA  MAY AGREE MY OPINION .

Top secret in Vishnu sahasranamam -watch this video or download at youtube.com

Thiruvaradhanam - listen and may please do this daily